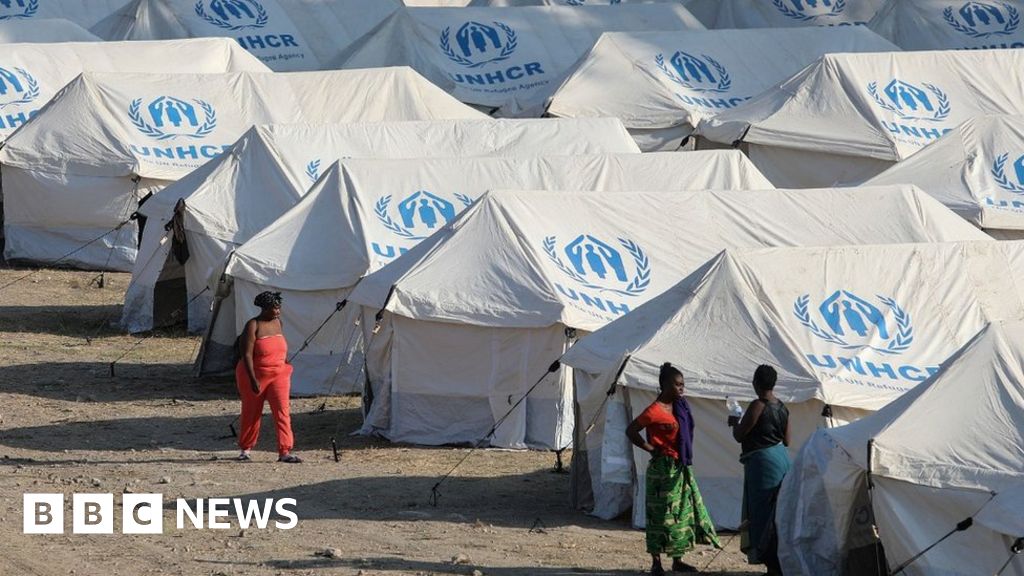 Greek police have arrested five migrants over the fire on Lesbos which destroyed an overcrowded migrant camp last week, a Greek minister says.

The five are young foreign nationals and a sixth is being sought, Citizen Protection Minister Michalis Chrisohoidis said.

About 800 of more than 12,000 migrants and refugees who fled the Moria inferno last week have moved to a new camp.

But the vast majority are still sleeping rough.

The Greek authorities say 21 people at the new camp tested positive for coronavirus.

They are now isolated from other migrants at the temporary Kara Tepe camp, on a former military firing range near the devastated Moria site. It is also near the island’s main town Mytilene.

The Greek government had accused migrants of starting the blaze at Moria a week ago, because they were angered by isolation measures imposed to curb the coronavirus outbreak. Migrants disputed that, blaming hostile locals for the blaze.

The German government has now agreed to take in 1,553 migrants from Moria – they are from 408 families who have received refugee status.

Earlier, Germany also said it would take in up to 150 unaccompanied minors from Moria. Greece flew 400 children to the mainland last week, and EU countries have agreed to receive them, though the details are not yet clear.

The Greek government’s aim is to shelter the 12,000 plus migrants from Moria in the new temporary camp at present, though it acknowledges that most are reluctant to go there. After the squalor of Moria most migrants want to go elsewhere in Europe.

But besides Germany, no other EU country has offered to take in hundreds of the migrants.

Meanwhile off Crete, Greek rescuers saved 56 migrants from a capsized boat but two children and a woman drowned.

Their bodies were recovered 12 nautical miles (14 miles) off Crete’s eastern coast and it is not yet clear if there were more victims.

Most of those who fled Moria have spent six nights sleeping rough, many on a road to Mytilene which is blocked by police, to prevent them reaching the port.

People from 70 countries had been sheltered at Moria, most from Afghanistan.

Greece plans to build a permanent reception centre for migrants and refugees on Lesbos. And it says that in most cases migrants can only leave Lesbos once their asylum applications have been processed.

The UN refugee agency UNHCR is equipping the temporary Kara Tepe camp. So far the conditions are reported to be very basic, with migrants lacking mattresses and showers.

Migration Minister Notis Mitarakis, quoted by the Greek daily Ekathimerini, said the temporary camp would be able to house all those from the gutted Moria camp.

Greek Prime Minister Kyriakos Mitsotakis said that it was “time for Europe’s support to pass from words into actions, to be expressed in tangible solidarity”. He was speaking on Tuesday after meeting EU Council President Charles Michel in Athens.

The Moria camp was initially designed to house 3,000 migrants and refugees. However, at the time it was destroyed more than 12,000 were housed there.

Since the 2015 migrant crisis the numbers arriving on Greek islands near Turkey have fallen considerably, but Greek camps remain overcrowded, as are those in Italy.

Greece and Italy have accused wealthier northern nations in the EU of failing to share the burden, as irregular migrants – including refugees from war zones – continue to seek a new life in Europe.

Central and eastern European members of the EU reject the idea of taking in a quota of migrants, and at the end of this month the EU Commission is expected to present a new plan for tackling the migration crisis.